where σ(λ) is the absolute absorption cross section at a certain wavelength (cm2 molecule-1), l is the optical path length (cm) and [R] is the concentration of the pollutant (molecules cm-3). From the experimental measurements of A(λ) as a function of [R], σ(λ) is determined from the slope of the A (λ) versus [R] plots.

IR absorption spectroscopy is based on the absorption of IR radiation (12000 – 10 cm-1). Like UV-visible absorption spectroscopy, this technique consists of detecting the transmitted IR radiation through a gaseous sample of stable species (reactant and / or product) at each wavenumber (ν ̃) between 4000 and 500 cm-1, in our spectrometers. The absorbance, A(ν ̃), corresponding to each ν ̃ is related to the concentration of the absorbent R inside the cell by means of the Lambert-Beer Law:

Thus, σ(ν ̃) is determined from the slope of A(ν ̃) vs [R]. The recording of IR spectra has a double objective:

1) The determination of the radiative efficiency and global warming potential of a primary pollutants.

2) To monitor the temporal evolution of both the reactant (primary pollutant) or its reaction products (secondary pollutants) in the smog chambers.

The PLP technique allows the generation of radicals from the photolytic breakdown of molecules by means of UV radiation. In our studies, a KrF excimer laser (Coherent, model ExciStar 200) provides pulsed radiation at 248 nm, which crosses the reaction cell through quartz windows. The energy of this radiation is on the order of 10 mJ/pulse at 10 Hz. The absorption of this radiation by H2O2 or HNO3 generates OH radicals in their fundamental electronic state, OH (X2П).

The photochemical precursor of OH radicals is introduced into the reaction cell by flowing the bath gas through a bubbler containing an aqueous solution of the precursor. 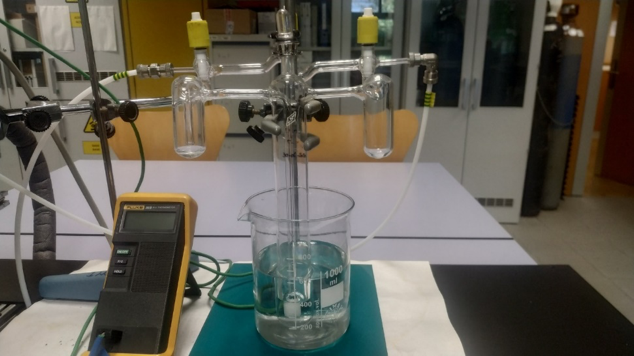 Glass bubbler with the aqueous solution of the OH-precursor.

The OH radicals generated by the PLP technique are excited to the first electronic excited state, OH(A2 S+, v’=1), by absorbing radiation at ~282 nm, achieved by the doubled frequency of a rhodamine 6G dye laser (Continuum, ND60; LiopTec, LiopStar). The dye laser is pumped by the second harmonic (532 nm) of a Nd-YAG laser (1064 nm). From this excited electronic state OH(A2 S+, v’=1) the spontaneous emission occurs around 309-310 nm.

The laser induced fluorescence at ~309 nm (ILIF(t)) is focused and detected in a photomultiplier tube, which transforms it into an electrical signal. ILIF(t)) depends exponentially on the reaction time, corresponding to a pseudo-first order kinetics:

where k‘ is the pseudo-first order rate coefficient, which depends linearly on the pollutant concentration. To vary the reaction time t, a pulse and delay generators are used to change the delay between the trigger of the photolysis and the excitation lasers. The entire PLP-LIF system is therefore perfectly synchronized. 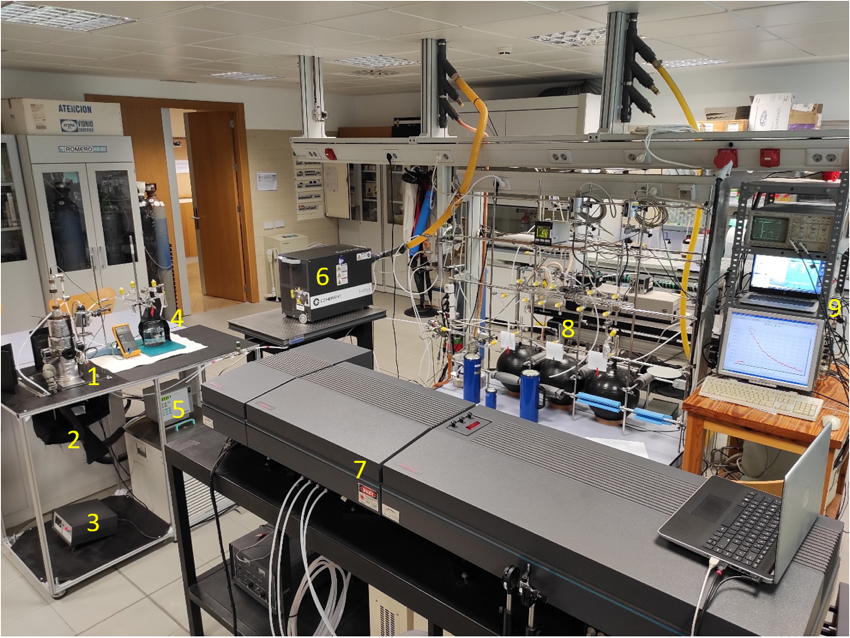 A relative kinetic method consists in determining the rate coefficient of the process under study (k) relative to that of a reference compound (kref) that is well known under the same pressure and temperature conditions. Therefore, in the relative kinetic method, the stable species, that is, the pollutant under study and the reference compound, are monitored as a function of the reaction time. To carry out the kinetic studies and the formation of gaseous products and particulate matter formed in the reactions with OH, Cl, and ozone, under conditions of the terrestrial troposphere near the surface (T = 298 K and P = 1 atm) two smog chambers are used. They consist in a reactor surrounded by several UV lamps where Cl atoms and OH radicals are generated in situ by continuous UV photolysis of Cl2 and H2O2, respectively.

Ozone is generated by electrical discharge in a commercial ozone generator:

Therefore, the reactions that take place in the reactor are:

Rearranging both expressions and integrating between time 0 and time t, the resulting integrated rate equation is:

View of the interior of the 264-L smog chamber and 16-L reactor used in the relative kinetic experiments.